Case Study By Dakshayani Suresh In 2017

The schools libraries set up by Parag in Gurmetkal block of Karnataka have impacted not just students, but built the skills of the library facilitators and established the library as an integral part of school education.

Bookmarks made by children as part of a book extension activity are displayed.

Two years after Parag set up 40 school libraries in Gurmetkal block of Yadgir district in Karnataka, the libraries have brought children closer to books. The libraries, set up in partnership with Kalike, an associate organisation of Tata Trusts, have also impacted several other stakeholders. They have given the facilitators the confidence to grow as library professionals and they have become integral part of school education.

At the Nazrapur school on a rainy morning in July, I ask a group of children gathered around me what more they would bring to their library if they had the chance. There is silence before one child sitting at the back says — his long-lashed eyes wide and serious — “More books. New books”.

“Are there things you’d like to do in the library that you haven’t done yet?”

The same child: “Read everything.”

Perhaps the most distinct, and the most fundamental impact when one considers the role of the Parag Libraries in these schools is this eagerness, this enthusiasm, this sense many of the children have of having stepped into a world they must conquer. In the M.T. Palli school, a fifth standard student, Mukund, is the library’s poster boy. He has read over a hundred titles, and can recite their names, and the names of their authors. When asked why he likes to read, he says, “I see the books and they look so nice I want to read them.”

It is also clear that the children have learnt to pay close attention to the books. When a library facilitator tells a story, he introduces the title, its author, its illustrator, and (in most cases) its translator. When a child gives a book talk or shares a book with her peers, she follows the same pattern. These habits help develop a rounded understanding of the object of a book—the processes and people and languages that go into its production. The students are also involved in covering their library books in plastic wrapping; they are given demonstrations on how to treat the books with care (indeed none of the books in the Parag- Kalike Libraries bare any marks of ill treatment). The result is that the children have a fairly complex grasp over the object of a book, from the moment of its creation to the manner in which it should be consumed.

There is uniformly something empowering about the library space for all its participants. For the students, the most significant change is in their levels of confidence. Chowdamma of the Minaspur library voices this most explicitly: they are children who have shed their inhibitions, become comfortable with their own methods of expression. She sees this as having come about because so many of the library activities involve the children putting down their own thoughts about the books they read, or composing their own stories in their language of choice, scribbling on swathes of chart paper in whatever manner they please. And what is important is that their work is validated—put up as display on the walls of the library and later, filed away for safekeeping. When giving book talks or conducting storytelling, the child is given the chance to speak before a captive and appreciative audience. Their demeanour during the task reflects their comfort—their voices grow louder, they hold the pages of their books wide open, they make eye contact. Student agency is actively encouraged, and the children have begun to have faith in their own creative abilities.

A student shares a book she enjoyed through a Book Talk.

Another aspect of the intervention that will doubtless have a deep impact for the children is the extent to which it encourages them to take ownership of their own libraries. For instance, the artwork on the walls has been painted in collaboration with the students, and when asked about it, they are quick to run over to the wall and point out which sections they painted. They like that their contribution was both useful and decorative, that they were trusted with the kind of responsibility that their parents and teachers normally keep out of their reach.

This, and other little tasks, like book repair, or the fact that they see their own paper flowers and crayon sketches adorning even the plain lime washed walls gives them the sense that the space belongs to them, that it is with their participation that the library is made both beautiful and functional.

A student paints a library wall as part of collaborative art to make the library space vibrant.

When the librarians chart their own progress over the course of their growing familiarity with the work of librarianship, they see several changes in themselves. The librarians I meet are all quiet, smiling, soft-spoken people. All of them state that their own reading habits have developed only since they have become librarians and come into contact with the carefully curated collections now at their disposal. Bhimashankar of Chapetla has gone a step further and begun writing himself. After the session, he reads out a short piece he has written on the nerale hannu or jamun—village elders disapprove of it for unknown reasons, it leaves a bluish tint on the tongue, it is best eaten with salt…

The job of conducting library sessions has also increased the animators’ confidence in themselves. Their training has given them a clear picture of how best to capture the children’s attention and they sing, dance, round up their classes, tell stories and facilitate games, all with gentle but unmistakable flair. They formulate detailed lesson plans and feel empowered by the clarity that the frameworks afford them. They like knowing in advance how to manage time, and how to handle each text, what kind of questions to ask to engage the students. They have a firm sense of their own skills and capabilities, with strong opinions regarding what activities are their favourites and what books they enjoy the most. (Ekki Dokki is a favourite across schools, for its humour, its illustrations and how popular it is with children. It appears that the gratification of sharing a book with a receptive audience is a joy that shapes the general animator response to a book.)

A significant challenge for animators is dealing with the variations in reading ability within the student group. Some children enter the library space almost completely devoid of the ability to read (so much so that the first thing most children say when asked about learnings from books is “we learn to read fast-fast”). Such children teeter on the brink of being non-readers all their lives, if not engaged effectively during these crucial years. That librarians across this set of schools have developed different strategies for tackling such problems is evidence of how they take charge of the library space, and that they trust their own judgement in these matters. Some prefer to allow children to take texts in through the illustrations till their reading skills are brought to fluency, while others read aloud with them, and still others leave children to read alone, however slowly and ask when they have doubts.

On the whole, while their understanding of the role of the librarian in the library and the library in the school and the community has deepened, this has not reached a point where they can articulate fully their beliefs about the space. But they all harbour a growing conviction that they, as individuals, can play a part in determining how these elements interact.

A Read Aloud engages students during a library session.

The most discernible impact of the intervention from the point of view of the schools is the acknowledgement of the library as a learning space. Principals refer to the libraries as spaces for expanding “knowledge.” To some this means a wider range of ideas to encounter, to others it means that existing knowledge can acquire depth (“Books can tell us about our past” is an oft repeated statement, and a reference to the book Mukand and Riyaz and the historical context of the Partition in the session at Buduru illustrates the truth of this). But the implication is that the libraries are helping push the boundaries of what it means to learn in these schools. Classrooms are no longer the only legitimate point of transacting knowledge. The library will slowly take on the roles of both supplement and alternative.

In one or two schools, the principals make an explicit connection between libraries and the idea of change. It is evident that developing well-equipped library is a symbol of progress in itself, but the potential of books to alter and enhance attitudes and outlooks is also an underlying feature of this thought process: “To grow, and to change with the times, we must read, and keep reading.”

The fascination with books has spilled over into the classrooms. There are reports of a new trickling phenomenon—subject teachers sending their students to the library to do reference work. The ways in which the library can be used as a classroom resource have perhaps not all been realised, but the space is certainly on its way to being recognised for the avenues of thought it opens up.

Bhimashankar says: “If they want to find out about fruits and vegetables they can come and look here.”

And a final mark of the infectious nature of the library bug is that other teachers borrow books too, to share with their classes, or simply take home and enjoy with their own children! 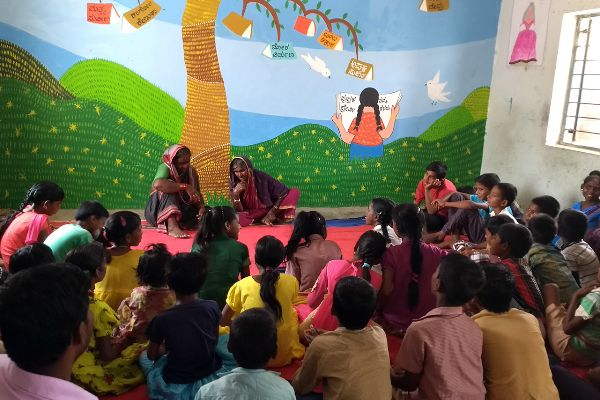 The Parag libraries in Yadgir district of Karnataka are inviting community into the libraries and making it an inclusive space. 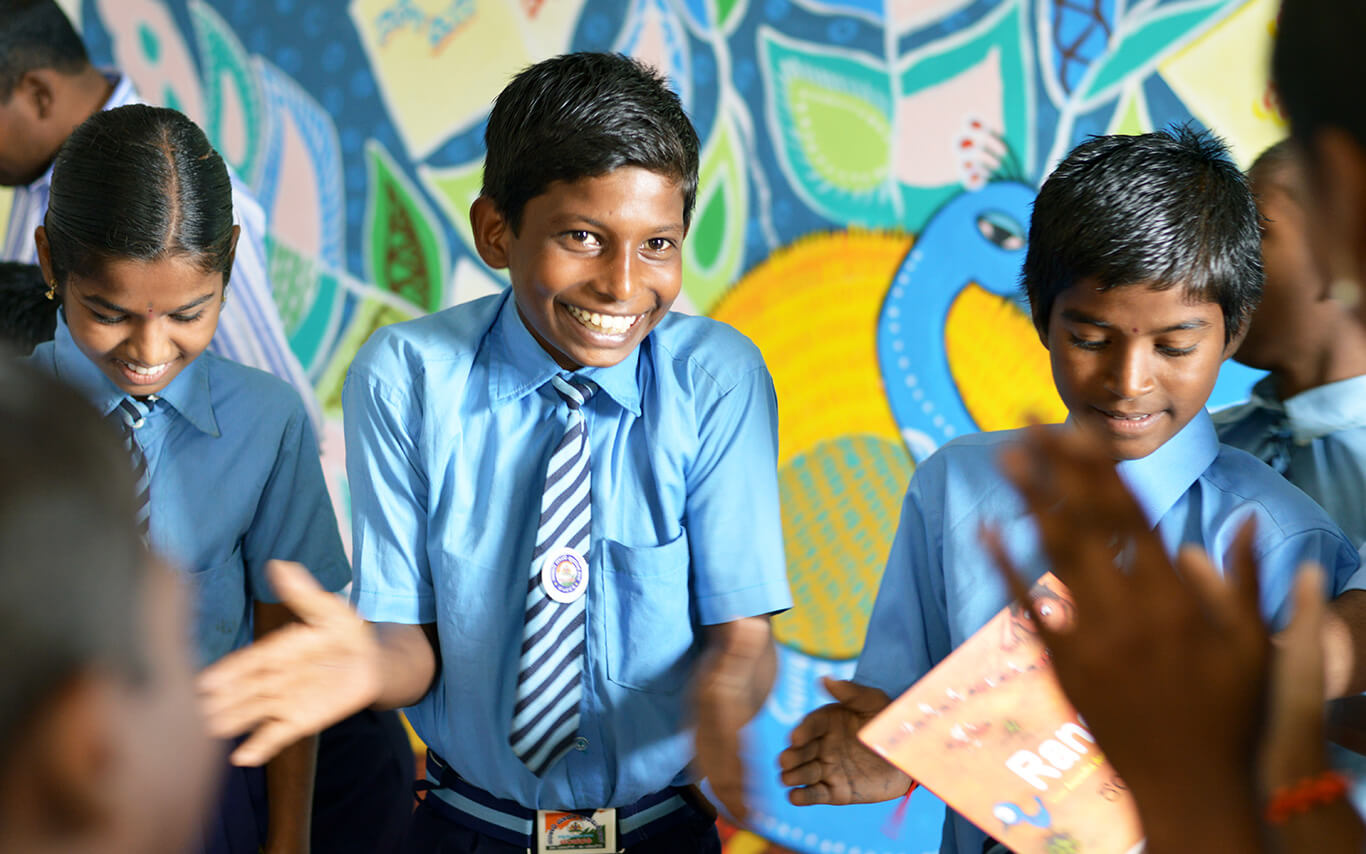 Carefully designed book extension activities in libraries play a key role in engaging both readers and non-readers. Activities introduce new books and genres, open up discussion and motivate children to reflect on their reading. 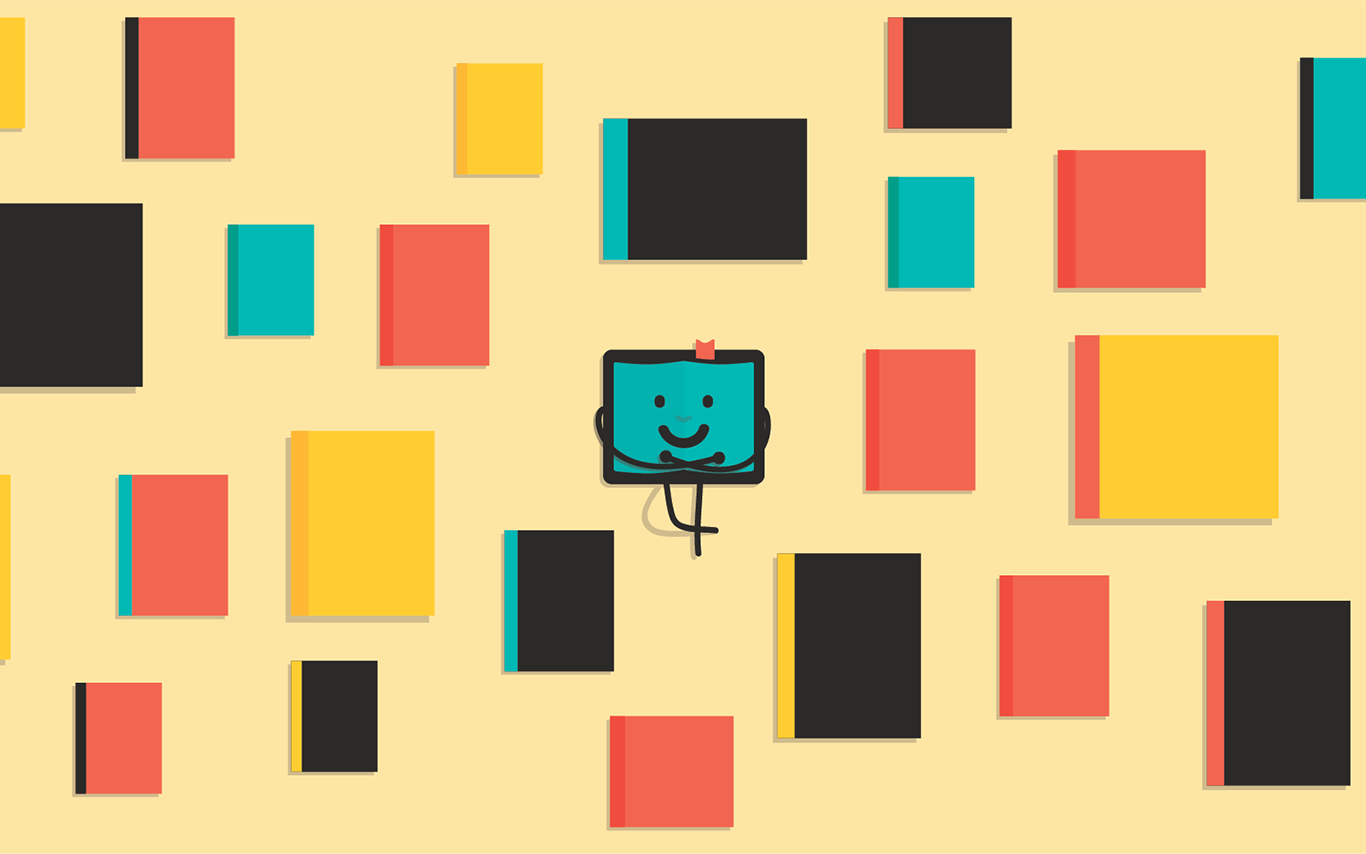 Kitablet is an e-Library app that hosts children’s books from some of India’s best publishers. The library is for children of grades 1-8, has books both in English and Hindi, and can be accessed on desktops, laptops or/and tablets. 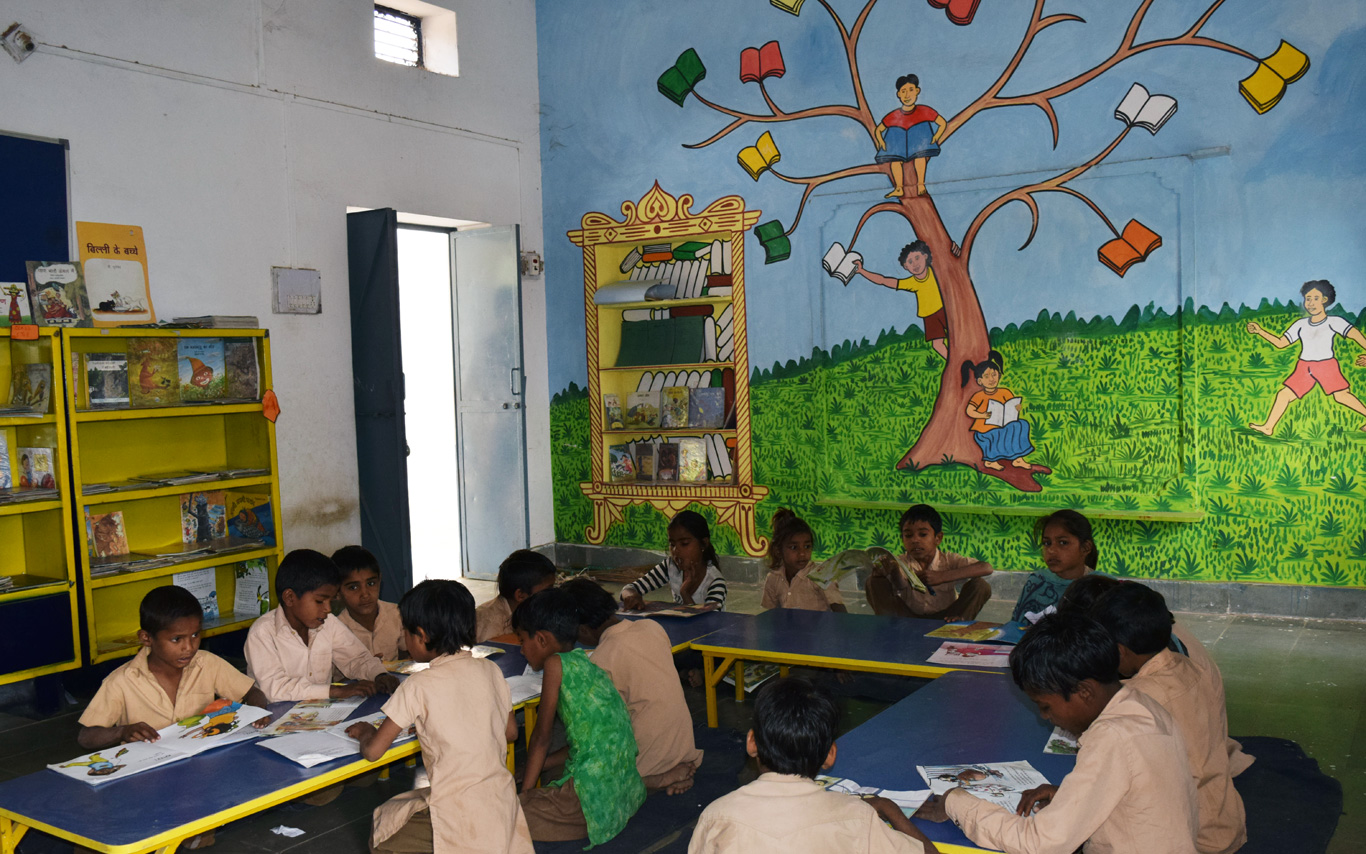 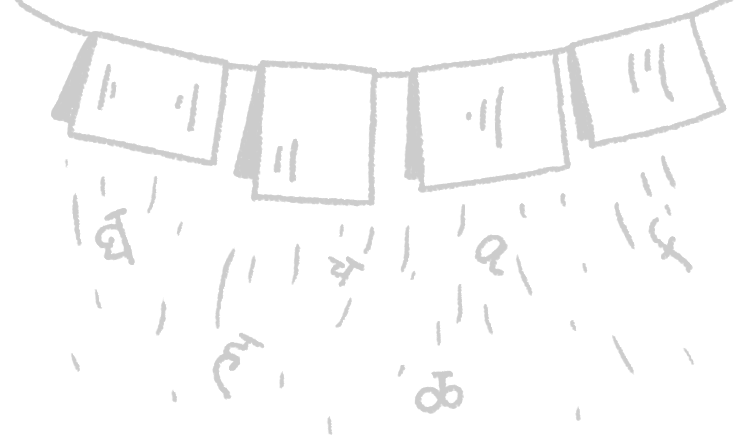 Parag has supported libraries across 8 states. Our libraries are present across government schools and community centres. We work closely with teachers and children to build their capacity in running vibrant libraries. We also involve parents through community engagement.