To continue with the stories of reading…

There is a reading which may not in the technical sense of the word qualify for reading, but it is making sense of sorts. Children as young as 4 years walk in to the Book Reading Club at times, (though formally the age group is meant to be 6-10 years). Then they grow in years and in stories and books.

Parth, who has been an infrequent but interesting visitor to the book club, first came sometime in 2012, when he was four and a half years old. A year younger that the youngest member. Something unique about him was that he never said “I have not read this book”.  If asked whether he would like to share the story with everyone, he said, “Sure”. Off he went narrating a story out of a book he had never read, heard or for that matter even seen before. He would go one page at a time, building up alongside, adding from stories he had heard, sometimes skipping pages if they did not match his story idea.

One day after flipping through 4 books, he just sat looking for a book he had not ‘read’before. Out of curiosity, i asked him if he had seen ‘Mein Bhi’(Eklavya) before? “Yes,”came the reply as usual. ”My mamma told me this story.”“Oh,great, so can you tell me the story?”“Sure, there were two ducklings, one was yellow and the other different. The different one was blue. The blue one would not even swim with her sister and mother. She wandered away somewhere. Then a man took care of her. Then she saw some swans one day…”(Ugly Duckling??) Having heard his story, i moved on to ‘Billi ke Bachche’(Eklavya). “This one, have you read this one?”“Yes, yes, two of the kittens go to Delhi…, isn’t that the one?”“And then what happens?”I am interested. “Er..eh..the third one does not go.”“Ok, so he stays back?”“Yes, he stays back, he is the youngest.”“And then?”Then he turned the pages and said, “in delhi, they enter a pipe trying to catch a frog.”  “Oh, the third one also joined them?”I try a bit of cross-questioning. “No, that’s the kitten they met in delhi and she showed them how to go through the pipe”…and the story went on. Once in a while, i would read out to him, pointing out words here and there.

In March 2014, Parth turned six and in the new academic year, he went to class 2. All this while he had been going through his formal training of learning the alphabet, reading stories in school textbooks. He would come to the book club at least twice out of four times in the month. I did not pay much attention to him individually for a while. He would still pick up books and flip through them. On a friday (book club day) in June 2014, i decided to see how much of the text he could read. Since he preferred Hindi, i decided on ‘Kyunji Beta Ramsahay’(again Eklavya), which has 4-line rhymes written in a nice big font. I was surprised to see that he could read quite well. He would often mix up maatras. ‘AA’maatra would be “AE’and even ‘EE’maatra would be ‘AE’at times. But being a hindi speaker he figured out the word, corrected himself and read on in most cases. After reading about three such rhymes, he started losing patience. Now, ‘baithe”became ‘bade’and ‘laddu’became ‘ladka’just by reading the first alphabet and ‘getting a sense of the other alphabets’, as it were, in the word; but true to his nature, he did not leave out a single word!

The desire to read and tell had always been very great. He even used the tools of prediction and previous knowledge (from books and otherwise) quite well.  In fact it was with the help of these two things that he read all the pictures and conjured up a story. This, in turn, led to a deepening of the desire to read. A year and a half later, when Parth had more tools like knowing the alphabet, exposure to text, listening to stories, figuring out words, sometimes by spelling, some by context and some by recognition, he was able to ‘read’and read quite well. Had the initial ‘fire’in him been missing, what would have been the quality and extent of reading within this one year, would there have been any desire at all to read, are questions that are worth exploring. But he had moved on – now if you ask him if he has read a story, he does not immediately say “yes”, instead he looks at it, flips through it, reads a line or two and sometimes says yes and sometimes says no. 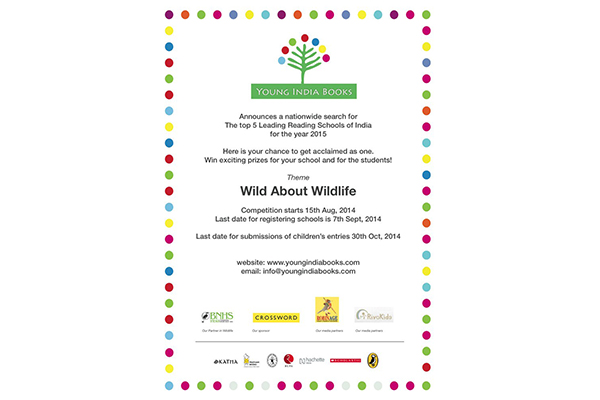 The Leading Reading Schools of India Award is an annual award established by Young India Books – India’s foremost review site of children’s books; to recognize and honour the five leading schools of the country; schools that believe in the power of the written word and inculcate a love for books and reading.

Written by Alaka Malwade Basu Recently I took a day off to be among the first to enter the branch of the Washington DC Public Library that has opened right across my street.